Well, bless us and splash us precious! We’ve been given ANOTHER award!!! Thanks so very, very much to Holly @ Nut Free Nerd for nominating us—she has a gorgeous blog and y’all ought to go and pay her a visit. Now, since we English gentry have so much time on their hands, we have answered all these questions with deep and emotional answers.

You must acknowledge the person who nominated you and display the award.
2) Answer 11 questions that the blogger gives you.
3) Ask your own 11 questions.
4) Nominate 11 blogs that you think are deserving of the award.

Clara: Cause one day Hermione was like, “We should have a blog!” and I was like, “Ok!” And since I had just gotten back from a friend’s house where we did nothing but watch Doctor Who all weekend, I called myself Clara, and here we are!

Hermione: It was all our dog’s idea. We just take all the orders from him. He writes all the posts, and we just type them out.

Clara: The Two Towers. Why? Why wouldn’t you like it? Its LOTR with Faramir being boss, Sam being Samish, lots of Rohan stuff, the most epic movie siege EVER and lots and lots of Gollum. Blurp

Hermione: Really, it depends on my mood. Sometimes Ever After, sometimes LOTR, sometimes Far and Away (which is the only movie I can stand Tom Cruise in, by the way. I usually consider him an irritating, angsty cult-ish midget, but he manages to make an okay Irish immigrant.)

Clara: My next destination will possibly be a small Arabic town, or maybe a Scandinavian-ish village. It simply depends on what book on my TBR list I tackle next.

Hermione: IRELAND. I GO TO THE LAND OF MY ANCESTORS.

Clara: Breaking a champagne bottle over a guy’s head after I kiss him, and slapping Zac Efron with a rotting salmon.

Hermione: It is my destiny…to find Nicholas Cage. And to silence him…. forever.

(I also want to do more normal things like finish my novel and see the Eiffel Tower at night and fall in love with a Scottish man…. And obviously I’m not a murderer. Except when it comes to my very own characters… *evil smirking*)

Clara: I’d love to say something like, “That chic little downtown bookstore,” but boringly I probably get most of my books from the local B&N.

Hermione: “Buy”? What is this “buy” you speak of, peasants?

I get all my books free from my source in the KGB, who ships everything out from Russia.

Clara: Do you mean if I could write up an itemized list of all the things I need to not get caught doing? Ha-ha, just kidding. Actually, I would probably tell myself to be less scared about stepping in the spotlight, to ask for help when I need it, and to go out for a sport. I’d be afraid to change too much though, because even our mistakes help make us the people we are today.

Hermione: Nerdy girls who hide in the corner of the library looking at books about WW2 airplanes are destined for greatness. And essay writing is a VERY VIABLE SKILL. Also—write down all your story ideas missy! You used to have so many…where did they all go? *sobs*

Clara: I don’t really have a “role model” in the sense. Fictionally though, I aspire to be as legit as Loki, as flawlessly perfect as Nikolai, as smart as Hermione Granger, and as fearless as Scarlett Benoit. My realistic role models are probably Princess Di, Ernest Hemingway and Lin Manuel Miranda.

Hermione: Hmmm…I guess all my fictional role models mostly influence me subconsciously…? The ones I can think of off the top of my head are Francie Nolan from A Tree Grows in Brooklyn, Liesl from The Book Thief, and Rachel Elizabeth Dare from the Percy Jackson books. Anne Frank—if you’ve read her diary it’s pretty obvious why. It’s such a push to make the most of all the time we’ve been given. And of course, my Mum. For the record, though, I am super confused as to why Clara put down Ernest Hemingway. (CLARA EXPLAIN YOURSELF).

Clara: Obviously I am destined for Broadway. If that doesn’t work out, I would want to work as a costume designer or swordsmith in WETTA workshops.

Hermione: Um, I want to play Merlin in a remake of that BBC show. And Clara can play Arthur! (Ha, ha you pathetic dollop-head!)

Hermione: THROW THE LEMONS AT CLARA

Clara: I don’t really have a clear earliest “memory” – I remember certain things – like a pair of yellow curtains, a cul-de-sac, a white and pink lamp, a pair of roller skates, stuff like that.

Hermione: I remember wandering around the playground by myself and making up stories in my head and watching people with an almost stalker-ish intensity. (So not much has changed…?)

Clara: Being able to control people or objects or the ability to control an element.

Hermione: MIND READING. I know, I know—there are 100,001 cons to this, but other people and other people’s thoughts and feelings are such a mystery to me! That’s why I love the notion of analyzing people physiologically—it’s like I’ve been handed a key and I’m finally able to unlock and understand someone. 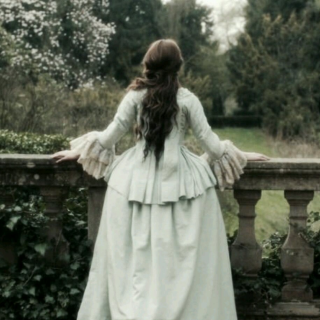